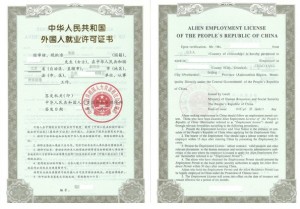 Every foreigner who works in China is supposed to hold a Work Permit issued by local labor department. Otherwise, the employment of the foreigner is illegal. The consequences of this illegality will be (1) penalties that may be imposed by local labor department and local police, and (2) more importantly, the change of the relationship between the foreigner employee and his or her employer from labor relationship to independent contractor relationship, which means the disentitlement to the protections and benefits such as severance pay, annual leave, that are otherwise available under related labor laws and regulations had the work permit been in place.

This post is concerned with the second consequence. For more in this regard, please read my previous post: Your employers no longer able to secretively cancel your work permit in Shanghai

It has been an established practice in both labor arbitration and litigation proceedings that without a valid work permit, an expat working in a company in China, though working himself or herself in the same manners as their Chinese colleagues, is not legally considered an employee of the company but an independent service provider (albeit it is not the case indeed). In case of any dispute between such expats and their companies, such disputes are not considered labor disputes and therefore labor arbitration commissions will refuse to take up such cases, and courts will only look at the contract as a general independent service provision contract, even though the contract is named as labor contract, and the foreigner is de facto providing dependant service.

And so far to the extent of my knowledge, no one has challenged whether such understanding and practice is correct or consistent with the laws. In the course of the representation of an expat client in suing Shanghai Labor Department for revoking client’s work permit, I have come to doubt the correctness and lawfulness of the current practice.

To understand the work permit system, let us first look at the general legal framework China has adopted to regulate employment of foreigners in China. With the largest population in the world, China has great pressure to create sufficient jobs for its own people, and it is understandable that China does not permit free employment of foreigners in China mainland, and instead, China has put in place a licensing system governing foreigners working in China.

Under the major piece of regulation governing expat employment, namely, the Administrative Provisions on Foreigners Working in China, it basically takes three steps to have a foreigner legally work in China.

Step 1, before the foreigner enters into China, the company will need to submit various documents (including personal information and work qualification materials of such foreigners) to apply to local labor department for the Alien Work License Certificate. In most cases, this  Alien Work License Certificate is an indispensible document for the foreigner to apply for a Z visa in order to come to China for work.

Step 2, after entering into China, the foreigner shall then submit documents including labor contract apply to local labor department for the Alien Work Permit which is issued to expats themselves.

Step 3, with the work permit ready, the foreigner shall apply to local police for the residence permit affixed to a page in the passport.

In practice, residence permit is issued by local police rather than labor department and thus this permit does not have much bearing on the labor issue in practice. So we examine the remaining two documents.

It is quite strange that seldom in the legal proceedings do judges talk about the Alien Work License Certificate but often assert that foreigners working in China without a valid work permit is illegal as if the work license certificate does not have any impact on the legality of the employment in question. It is clearly a mistake. On the contrary, the work license certificate shall play a greater role in determining the nature of civil relationship between the expat and the company he or she works in.

Therefore, upon the issue of the work license certificate, both the company and the foreigner shall be deemed to have obtained the right to enter into the employment relationship. Here is a sample of this Alien Work License Certificate or Alien Employment License:

In reality, the issue of work permit is rather a procedural step without involving any substantive approval, and will always be issued so long as the required documents are complete and in order.

3.  From the labor contract point of view, it is groundless to regard the work permit as a condition precedent for the effectiveness of the labor contract. Article 26 of China Labor Contract Law lists a few circumstances under which a labor contract may be void or nullified in whole or in part, but none of these listed items has anything to do with work permit.

4. From the general equity point of view, it is greatly unfair to expat employees who have landed on China soil only to find that they cannot be treated equally while they perform their duties and follow company’s rules in the same manners as their Chinese counterparts and that they can be easily played around by their employers, in each case simply because of work permit which is totally in the charge of the company. The sheer unfairness and stark inequality can in no means be justified.

With all said above, so what is the work permit?

It is my opinion that the work permit shall be only taken as an administrative tool or mechanism in administering alien employment in China without any weight to affect the nature of civil relationship. If an expat works without a work permit, the legal outcome is that he and his employer will be penalized by labor department, and that is it.

I am convinced myself that the above analysis and understanding stand to reason. I am not sure that I can equally convince arbitrators or judges but I am sure that they cannot defend their old stance in the face of my new arguments above.

If you are being wronged or treated unfairly by your employers because of work permit issues, let me know.