I ran across a piece of news on www.Ifeng.com telling a story of a couple from Singapore purchasing a historical house in Shaoxing City, Zhejiang Province, China, that is adjacent to the “Baicao Garden” depicted in the literature by the famous historic writer, Lu Xun.

The house was built a century ago by a noble family whose line of descendants runs to today. The neighboring area has been designated by local government as historic site under special protection by local authority, which means that the area will not easily be torn down and redeveloped and the house will be likely to stay safe and intact. The Singaporean couple spent USD 215,000 for purchase of the house and then it took them another USD 560,000 to renovate and redecorate the house inside-out, keeping the historical style and cultural sentiment of the house while making it equipped with modern wares to have comfortable life. 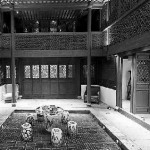 It is a good deal? Who knows. But it is probably not a bad idea for real estate investors to shift their attention to such historical houses which is very Chinese indeed, esp on the backdrop that current Chinese real estate market offers little exciting opportunity for investing in residential properties.

Of course, you don’t simply buy old houses but old house with strong historical meaning or reflection of Chinese culture. Generally, such houses or properties are being protected by local governments for the purpose of reserving the historical and cultural identity of such places. For example, in Shanghai, there are a few areas within which the old houses built very often before founding of PRC are offered special protection and preservation, such as the French Concession Area and the Bund Area. Such houses in such designated area may sit there and last for good as government won’t easily taken back the underlying land and redevelop such areas. Further, the land beneath such houses are often not the so-called “granted land” which has a life of 70 years only. Instead, the land is the “allocated” land without paying any fees to government and without the 70-year period. In other words, you don’t even need to worry about whether you will be required to pay the land grant fee upon the expiry of 70 years. Of course, Chinese government may later change its laws to asking the owners of such houses to pay land grant fee, but nobody knows whether that will happen at all.