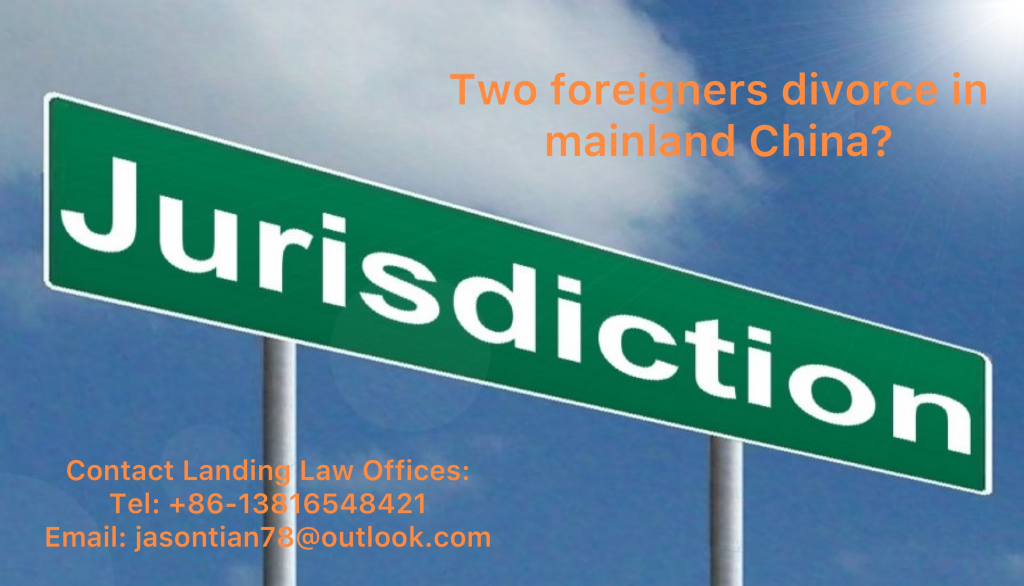 It has almost been two years till we attained this long-awaited victory for our client, removing the blockage for the two-foreigner couple to divorce in China court.

Indeed, at the time of receiving the decision of the appellate court, the client and us almost gave up. We didn’t because there was no other solution for the client, we have to knock down the wall.

I. Background of the Divorce

It is a divorce case. Husband is a Canadian gentleman, and wife is a Philipino lady. They got married in Hong Kong (a special administered region of PR China). Husband and wife had separated for long, and both agreed to divorce, and there was no dispute over either property division or child custody. Husband stayed in Guangzhou China working in an international school, and the wife had returned to Philippine years ago.

After husband approached us for help, we realized that this was a special case: neither of the husband and wife is Chinese citizens, nor were they married in China. Further research found out that because neither of the couple resided in Canada or Hong Kong, and none of them had any meaningful connection with Hong Kong, establishing divorce jurisdiction in the two places. To make it worse, Philippine is a country that has no law on divorce litigation.

The only possible place for them to divorce seemed to be in China where the husband lives and works till present. Our team then did quite a bit of research on precedent cases decided in China where two foreigner couple are involved. There are not a lot of but a few cases of this kind decided by China courts. We do believe that with one party has firmly established habitual residence in China, China court should have jurisdiction over the case based on Article 22 of China Civil Procedure Law.

Indeed, we did write a post back in August of 2019 in which we stated that China court should have jurisdiction over such a divorce case so long as one of the spouse has habitual residence in China.

(1) The Decision of Nansha District Court

With those cased decided elsewhere in China, we were optimistic about getting the case filed and adjudicated with the court in Nansha New Area in Guangzhou where the husband has been living and working to date. After all, Guangzhou is one of the four first-tiered cities in China that has spearheaded in China opening and reform till now. A metropolitan city like Guangzhou with many foreigners living and working there should be willing to take up such a divorce case involving two foreigners couple.

It proved that I was naive then. After submitting the documents to the court and filed the case, the judge initially contacted me saying it was the first divorce case ever like this, and they needed extra time to internally discuss it. That was not a good sign. After some delay, I went to the court with my client and sat down with the judge, and made our messages clearly conveyed. Still she seemed hesitant to proceed with hearing the case, and hinted that the case may be rejected.

As there was really not other alternative for the client. We decided to leave the case to the court, and we didn’t withdraw the case.

In October, 2019, we received the decision of Nansha district court of refusing to exercise jurisdiction over the case citing the reasons that neither of the couple was Chinese citizen, and place of marriage was not within China mainland. Despite our pointing out Article 22 of China Civil Procedure Law as the legal base, they ignored this without explaining why this law should not be applied.

(2) The Decision of Guangzhou Intermediary Court

Then we decided to appeal the decision of Nansha court to the Guangzhou Intermediary People’s Court, hoping that the upper court may have the balls to take up a novel divorce case like this.

After a hearing, we waited another two months before we received the decision of the intermediary court. Sadly, we were even more disappointed, as the intermediary court definitely erred in reasoning why they have no jurisdiction over such a divorce matter. They applied substantive laws in concluding on a procedural issue.

To put you in context, basically there are four levels of courts in China: the district court -> intermediary court at municipal level -> high court at provincial level -> China Supreme Court at the top of hierarchy. Further, a civil case in China generally runs through two stages of court proceedings before the final and binding court decision is made. The first stage is the court of first instance proceeding. Here the court is generally the district court (lowest level), and could be higher level court if the matter is of more significance in terms of amount in dispute or nature of the dispute. After the court of first instance delivers its decision or judgment, any part may appeal the same to the next higher court if he or she is not happy with decision or judgment of the first-instance court. However, that is not the final end. After the appellate court decision takes effect, a grumbling party may further seek justice by applying to the next higher court for a RETRIAL of the case.

The retrial is what our client decided to do, despite the fact that generally there is very little chance of success with retrial. Again, the client didn’t have any other option. We forged ahead.

While retrial courts may open new hearing for cases, for a simple matter of court jurisdiction, there is no court hearing scheduled. Neither the client nor I were summoned to court. Basically, the judges decided based on the documents we submitted.

Fortunately enough, we persevered to the hard-earned victory: Guangdong High People’s Court agreed with us that the lower courts should exercise jurisdiction over the divorce case involving two foreigners according to Article 22 of China Civil Procedures Law.

III. The Implications of the Case Decision

While there has been no clear guidelines from China Supreme Court on whether China courts should exercise jurisdictions over a divorce case where the couple are both foreigners and they get married outside China, this decision from a provincial high court will set a good precedent for other courts before similar cases.

Don’t get me wrong. China is not a common law jurisdiction where precedent cases will have to be followed by other courts. But since this decision is made by the high court of Guangdong province, it will surely be followed by lower courts in Guangdong Province.

On the other hand, given the decision is made particularly for this specific jurisdiction issue, it will likely be respected by other courts in other provinces in China, leading to a national consensus on this issue.

While two foreigners can no longer register their marriages in China, they can however dissolve their marriage here, provided however one of them has established valid habitual residence in China.