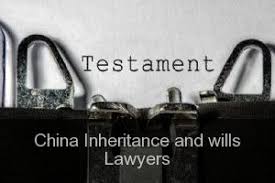 Overview of Inheritance and Estate Planning under Chinese Laws

Over the last 10 years, I and my team have been offering legal services related to inheritance and estate planning for clients from many other countries outside of China. We have written a number of posts on this blog in that regard.

I. Inheritance Law in China

But things are made tricky and complicated when China enacted its law on the applicable laws in foreign-related civil relationships. We will further explain.

In the case of intestate inheritance, the estates go to the heirs in such sequences as provided in China Succession Law:

When there is a valid will, under Chinese inheritance law, the will is generally respected, so estates will pass on to the designated beneficiaries in the will.

We will touch on how to make a will in the II part (Estate Planning) below.

3. Estate Administration and Distribution in China

In either intestate or testate case, to the clients, the question is how they should go about the inheritance process and finally acquire the ownership or titles to the assets left by the decedent.

In many countries, they have the probate proceeding administered by courts for purpose of liquidating the decedent’s estates and distributing the estate assets to heirs in accordance with the law and the Will left by the decedent. Unfortunately, to date, China doesn’t have such special court proceeding in dealing with estates.

Generally, there are two ways of conducting inheritance and distribution of estates:

When there are no disputes among the heirs, then the best way to go about the inheritance is to have the notary office (in the place where the estates are situated) issue the notarization document confirming the heirs’ right to inherit the estates. With this notarization documents, recipients of the estates can go to relevant entities (such as banks, insurance companies or securities brokers) and real estate registration and company registration authorities to effect title transfer for the estates.

Generally heirs and other interested persons who are to receive the estates shall appear before the notary officers to show and prove that there are no disputes and all agree on the division and distribution of the estates.

Again, all beneficiaries (heirs or legatees) shall appear before the real estate authority to show and prove there are no disputes.

While that may benefit some local Chinese people, it does not mean much to foreigners who are entitled to estates in China because (1) it is too costly and a challenge to coordinate multiple foreign heirs to appear at the same time before real estate authority and (2) officials at the real estate authority are not so well versed in laws and rules related to inheritance by foreigners. They tend to be reluctant to deal with inheritance by foreigners and avert the matter to notary offices.

If there are disputes of any kind that prevent the parties from cooperating with each other peacefully, then the only way to move on is to take the inheritance matter to courts for a solution. Very often, even there is no dispute, but due to the lack of certain document, notary office may refuse to issue the inheritance right notarization, then the matter shall be submitted to court for a solution as well.

What bothers estate practitioners in China is that we often have to “make” or “fabricate” a lawsuit (with plaintiff and defendants) in order to help clients to complete the inheritance, mainly because, as mentioned previously, China doesn’t have a probate-like proceeding where one party can institute the proceeding to get the court to work on the matter.

In 2011, China enacted its law on the choice of laws in foreign-related civil relationships.

In respect of inheritance of estates, the law provides:

Article 32 A testament shall be confirmed as duly made if its form conforms to the laws at the habitual residence, of the state of nationality or at the locality of the testamentary acts when the testament is made or at the time of death of the testator.

Article 33 The laws at the habitual residence or of the state of nationality when the testament is made or at the time of death of the testator shall apply to the validity of a testament.

So in either intestate or testate succession, it is possible that foreign laws shall be applied, esp in relation to inheritance of estates that are movable properties or personal properties.

The problem is that when a foreign law is involved in the inheritance process, China notary offices are averse to work on such a case for the obvious reason that they don’t know about the foreign laws and cannot determine whether a certain beneficiary is really entitled to estates under such foreign laws. Then what to do? Go to court? Yes, that is the way ahead, but that, as said above, has its own version of problems.

The concept of estate planning is actually new to Chinese people, but has been increasingly popular recent years thanks to overseas institutions’ promotion of family asset succession targeting Chinese rich clients, and to the chorus of domestic institutions such as law firms and family offices.

Unlike in the common law countries, there are few legal instruments that can be employed to do a good estate plan. China has a long way to go before it can provide good legal tools for its citizens to do estate planning. On the other hand, because China does levy estate tax or inheritance tax, nor does it collect gift tax, there is probably less strong demand for estate planning which are often focused on tax saving. But family business succession is really looming large in China society with many first generation entrepreneurs retiring.

What are the legal tools available under Chinese laws?

Yes, you can make a will for your assets in China. But hold on, it is not that straightforward.

For an alien from outside of China who has assets such as real estate or corporate stock, you can write a will by yourself and sign your own name and date it. But in practice, to ensure clarity and no dispute arises in the future in regard of the Will, common practice is to have the will notarized when testator makes his or her will.

Here comes the problem. If the foreigner doesn’t have a habitual residence in China, then as per the quoted legal provisions above, the validity of the Will won’t be governed by Chinese laws, so the China notary offices generally refuse to notarize your will, unless you live in China for more than a year establishing your habitual residence in China. You will have to notarize the Will in your home country. Upon your death, your heirs will have trouble in obtaining an inheritance right notarization from China notary office as discussed above if the applicable law is the foreign laws.

A durable power of attorney is commonly used in US, UK and other common law jurisdictions by people to allow others (often their family members) to act on their behalf when they get incapacitated or too old to move around.

Till the enactment of the General Principles of China Civil Code in 2017, China does not have a law specifically allowing its citizens to grant a POA to others to act for them when they are incapacitated entirely or in part. Article 33 of this new law now provides:

But since this is relatively a new development in law, it remains to be seen how this will be implemented in real life. We anticipate that the POA shall be duly notarized at notary office in order for it to be recognized by third parties such as creditors, banks, insurance companies or government agencies.

Does China have Trust Law? Yes! We have. But China Trust Law is basically used exclusively in financial market in the past, very little it can do for purpose of estate planning in China. You can read my post here about China Trust Law.

But foreign clients from common law jurisdictions love trusts, which are indeed the most effective way for purpose of estate planning and family asset succession and protection.

However, if you wish to include your properties in China into your trusts, then you should be careful of your choice of trustees, for that purpose, you may wish to read another post on this blog: legal-implications-on-the-choice-of-trustees-for-properties-in-china.

To take advantage of trusts, Chinese rich people have started to set up their trusts in settlor friendly offshore jurisdictions. This is exactly what our team is doing for Chinese clients.

(4) Foundations, Partnership and Others

Yes, you may resort to other legal mechanisms to partially achieve your goal for estate planning, such as corporation, contracts, partnership and foundations. But to save this post from being too long, we won’t discuss those tools in much detail here.